A dog will always get recognized for being loyal to his owner. And one living proof of the loyalty a furry friend could give to his human buddy is what Talero, a German Shepherd, showed to his master.

Quirós, Talero’s owner, accidentally died in a snowstorm, and Talero, like a loyal dog, did not leave Quirós and even protected his body from other animals. He stayed by his owner’s side for 23 days in the snow.

One day, Bernardo Leónidas Quirós, his wife, two children, and Talero, went on a family trip. They were all on their way to pay a visit to Quirós’ brother, residing in Argentina’s southern region. Unfortunately, their car broke down on a low traffic road. So, Quirós, along with Talero, went down the car in search of help.

The two were not able to seek help as no one else was around. What happened next was a disaster, as both of them got caught in a snowstorm. 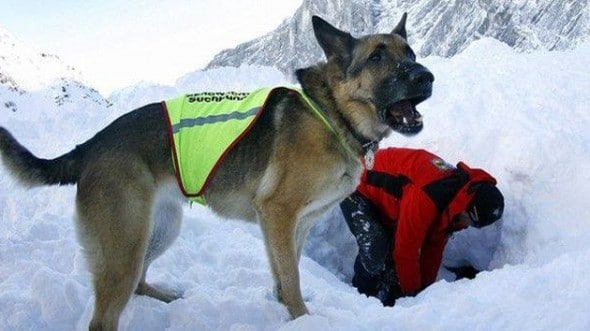 After 23 days, the police found Quirós’ body frozen, at Alto Río Senguer, Patagonia, Argentina. They were able to identify his body with a family member, who recognized Talero, standing near their relative’s corpse.

At first, Talero barked at the rescuers, trying to protect his master just as he did for 23 long days. But when he realized that they were rescuers, he went under the bush where Quirós’ body was. Indeed, until Quirós’ death, Talero was there, protecting him at all costs. He never left his master’s side, no matter what happened.

Meanwhile, the authorities examined the body, and they found no sign of violence. They then concluded that Quirós got disoriented, lost his way, and unfortunately died due to the exposure to frostbite and other cold elements. Rescuers also found his wife and two children, who remained in the car, still. Fortunately, they were alive and in good health.

Source: Katherine via Life With Dogs

Loyal Canine Mourns Beside The Casket Of His Navy SEAL Owner

After So Many Years, Neglected Dog Finally Finds A Foster Home

Some dogs are born lucky - they have families who love and care for them. On the other hand, some live harsh lives. An...

WWE Star Dog Passes Away At 17

This Lost Wonder Dog Walked A Thousand Miles In The Middle...